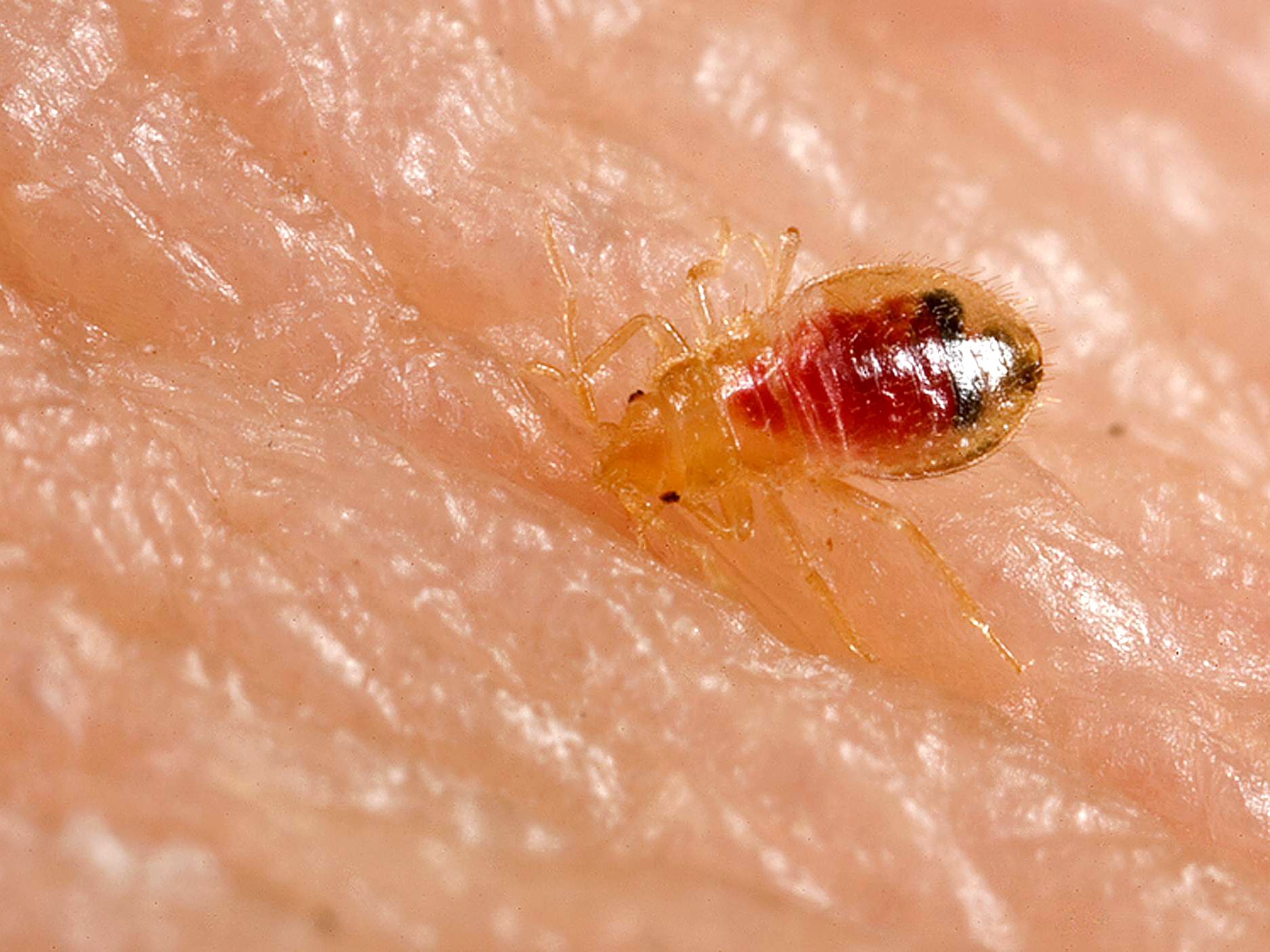 They will however, feed on other warm-blooded animals, including birds, rodents, and pets.

Bed bugs have been documented as pests since the 17th century. They were introduced into the American continent by the early colonists. Bed bugs were common in the United States prior to World War II, after which the widespread use of synthetic insecticides such as DDT greatly reduced their numbers. Improvements in household and personal cleanliness as well as increased regulation of the used furniture market also likely contributed to their reduced pest status.

In the past decade, bed bugs have begun making a comeback across the United States. The widespread use of baits rather than insecticide sprays for ant and cockroach control is a factor in their resurgence. Bed bugs are blood feeders that do not feed on ant and cockroach baits. International travel and commerce are contributing to the spread of these insects, because the eggs, young, and adult bed bugs are easily transported in luggage, clothing, bedding, and furniture. Bed bugs can infest airplanes, ships, trains, and buses. Bed bugs are most frequently found in dwellings with a high rate of occupant turnover, such as hotels and motels, dormitories, shelters, apartment complexes, and prisons. Bed Bug infestations usually are not a reflection of poor hygiene or bad housekeeping.

Adult bed bugs are brown to reddish-brown, oval-shaped, flattened, and about 3/16 to 1/5 inch long. Their flat shape enables them to readily hide in cracks and crevices. The body becomes more elongate, swollen, and dark red after a blood meal. Bed bugs have a beaklike piercing-sucking mouthpart system. The adults have small, stubby, nonfunctional wing pads. Newly hatched nymphs are nearly colorless, becoming brownish as they mature. Nymphs have the general appearance of adults. Eggs are white and about 1/32 inch long. Female bed bugs lay from one to twelve eggs per day, and the eggs are deposited on rough surfaces or in crack and crevices. The eggs are coated with a sticky substance so they adhere to the substrate. Eggs hatch in 6 to 17 days, and nymphs can immediately begin to feed. They require a blood meal in order to molt. Bed bugs reach maturity after five molts. Developmental time (egg to adult) is affected by temperature and takes about 21 days at 86° F to 120 days at 65° F. Bed bugs can go without feeding for 80 to 140 days; older stages can survive longer without feeding than younger ones. Adults have survived without food for as long as 550 days. A bed bug can take six times its weight in blood and feeding can take 3 to 10 minutes. Adults live about 10-14 months and there can be 3 to 4 generations of bed bugs per year.

Bed bugs are fast moving insects that are nocturnal blood-feeders. They feed mostly at night when their host is asleep. After using their sharp beak to pierce the skin of a host, they inject a salivary fluid containing an anticoagulant that helps them obtain blood.

Nymphs may become engorged with blood within three minutes, whereas a full-grown bed bug usually feeds for ten to fifteen minutes. They become elongated after a blood meal. They then crawl away to a hiding place to digest the meal. The sole source of food is the blood meal they take at night from humans or bats during the day. When hungry, bed bugs again search for a host.
Bed bugs hide during the day in dark, protected sites. They seem to prefer fabric, wood, and paper surfaces. They usually occur in fairly close proximity to the host, although they can travel far distances. Bed bugs initially can be found about tufts, seams, and folds of mattresses, later spreading to crevices in the bedstead. In heavier infestations, they also may occupy hiding places farther from the bed. They may hide in window or door frames, electrical boxes, floor cracks, baseboards, furniture, and under the tack board of wall-to-wall carpeting. Bed bugs often crawl upward to hide in pictures, wall hangings, drapery pleats, loosened wallpaper, cracks in plaster, and ceiling moldings. The bite of a bed bug is painless. The salivary fluid injected by bed bugs typically causes the skin to become irritated and inflamed, although individuals can differ in their sensitivity. A small, hard, swollen, white welt may develop at the site of each bite. This is accompanied by severe itching that lasts for several hours to days. Scratching may cause the welts to become infected. The amount of blood loss due to bed bug feeding typically does not adversely affect the host. Rows of three or so welts on exposed skin are characteristic signs of bed bugs. Welts do not have a red spot in the center such as is characteristic of flea bites. Bedbugs bite the host most commonly around the waist while in bed sleeping. However, bites may occur on exposed skin such as arms and legs. Some individuals respond to bed bug infestations with anxiety, stress, and insomnia. Bed bugs are not known to transmit disease, but its affect on people is substantial and debilitating.

A bed bug infestation can be recognized by blood stains from crushed bugs or by rusty (sometimes dark) spots of excrement on sheets and mattresses, bed clothes, and walls. Fecal spots, eggshells, and shed skins may be found in the vicinity of their hiding places. An offensive, sweet, musty odor from their scent glands may be detected when bed bug infestations are severe.

Control of bed bugs is best achieved by following an integrated pest management (IPM) approach that involves multiple tactics, such as preventive measures, sanitation, and chemicals applied to targeted sites. Once the bedbugs have spread, infestations usually are best handled by a Quality 1st pest solutions professional.

Do not bring infested items into one’s home. It is important to carefully inspect clothing and baggage of travelers, being on the lookout for bed bugs and their tell-tale fecal spots. Also, inspect secondhand beds, bedding, and furniture. Rodents that can serve as alternate hosts for bed bugs.

A thorough inspection of the premises to locate bed bugs and their harborage sites is necessary so that cleaning efforts and insecticide treatments can be focused. Inspection efforts should concentrate on the mattress, box springs, and bed frame, as well as crack and crevices that the bed bugs may hide in during the day or when digesting a blood meal. The latter sites include window and door frames, floor cracks, carpet tack boards, baseboards, electrical boxes, furniture, pictures, wall hangings, drapery pleats, loosened wallpaper, cracks in plaster, and ceiling moldings. Determine whether birds or rodents are nesting on or near the house. In hotels, apartments, and other multiple-type dwellings, it is advisable to also inspect adjoining units since bed bugs can travel long distances.

Discarding the mattress is another option, although a new mattress can quickly become infested if bed bugs are still on the premises. Steam cleaning of mattresses generally is not recommended because it is difficult to get rid of excess moisture, which can lead to problems with mold, mildew, house dust mites, etc. In dealing with an infested sofa, love seat or upholstered chair, disposal may be necessary since it is difficult to get treatment into the deepest crevices of the furniture where the wood frame may provide harborage for bedbugs.

In cases where the population of bedbugs is high, treatment of adjacent rooms may be necessary. Closets in bedrooms may require treatment and the contents will need to be washed and dried as needed.