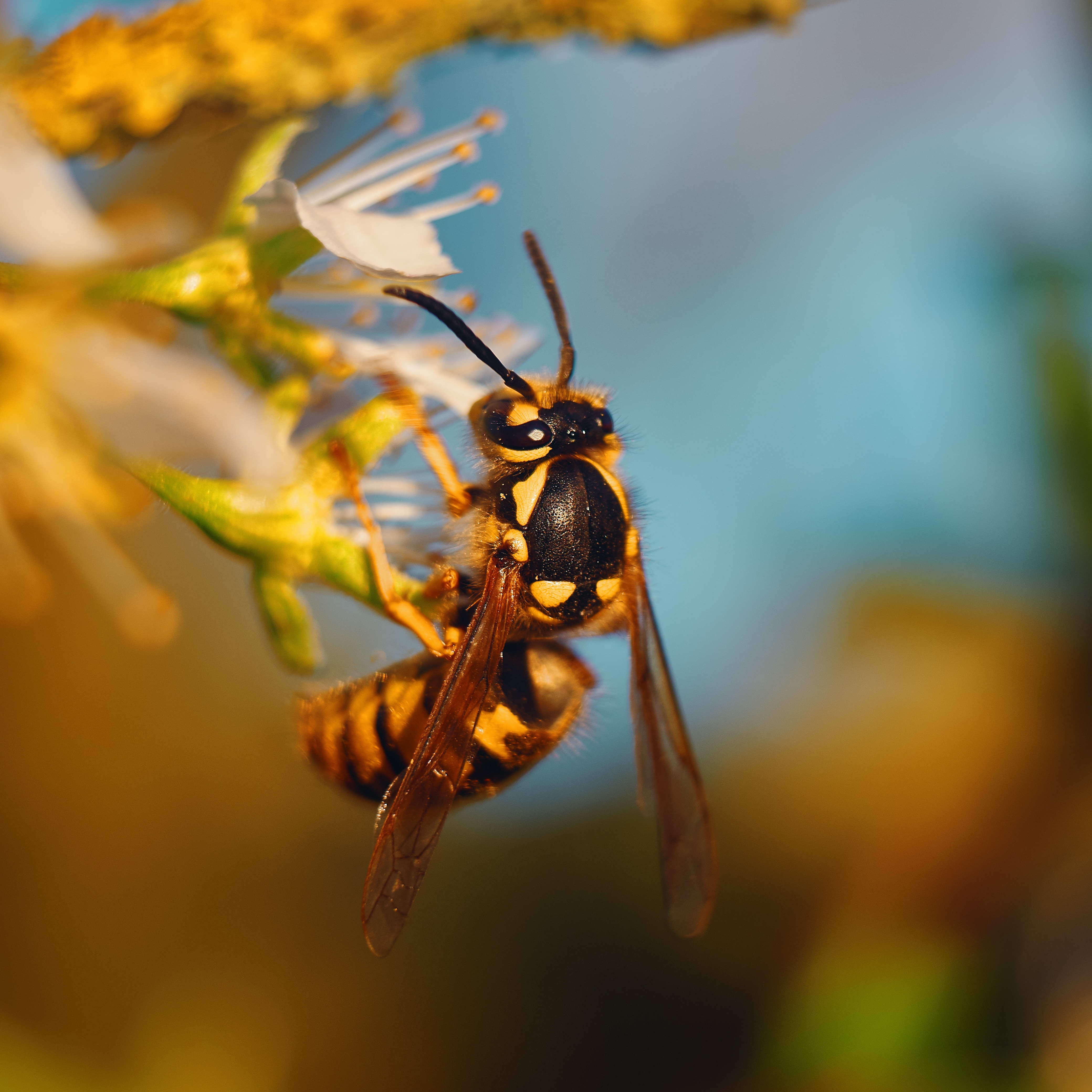 There are about twelve different species of yellow jackets & hornets in the Pacific Northwest.

Hornets are a type of aerial nesting yellow jacket. Its nest visibly hangs in the air on a bush, tree, under the eave of your house, or some place similar. Their colors may vary. Hornets are black and yellow. The bald-faced hornet is black & white.

Both yellow jacket & hornet nests are similar in structure, it’s a paper nest made of wood fibers. Unlike the paper wasp nest, a yellow jacket nest has a paper coating that is gray or brown in color. It resembles a paper machete ball with an entrance hole towards the bottom.

When yellow jacket queens first start their nest in the spring the nests are quite small, like a golf ball. Towards fall their nests can be very large. We’ve been in attics where the outer paper coating of the nest was five feet in diameter. However, most nests get to be just a bit bigger than a basketball with a few thousand yellow jackets in them. At the end of their cycle the queen will raise other queens for next year. Those queens leave the nest to find a place to hibernate for the winter, while the original nest dies out, never to be used again.

Yellow jackets are very aggressive and can be dangerous and cause considerable damage to your home. If you find them going in & out of a hole in your house you should have it treated immediately. They have a mandible like a carpenter ant & can chew through your wall quite easily. In most cases they’ll take a couple of weeks to do so, but if you spray their outside hole with a can of spray or caulk it, & they get desperate for another way out, they can come through much sooner.

In the Northwest there are several species of paper wasps & mud wasps, or mud daubers. Most are black & yellow, but some mud wasps are black with a metallic blue tint to them. These wasps are very beneficial insects. They are not aggressive and won’t do any damage to your home. They do have a stinger that they use to paralyze insects to eat, but they don’t use their stinger to attack people. However, while wasps will not defend their nest they will defend themselves. You can be stung if you swat at one or step on it barefoot.

Paper wasps make small nests out of wood fibers & are commonly found under the eaves or in the attic of houses & buildings. Their nests are open & the honeycomb shaped cells are exposed. Usually wasp nests are quite small (the size of a dime to hand size). Paper wasps start their nests in the spring. A queen starts each nest & then raises workers. A huge nest of paper wasps might get to be seventy-five in numbers, but most nests may have only twenty to forty wasps on them. At the end of their cycle the queen raises other queens for next year. Those queens leave the nest to find a place to hibernate for the winter while the original nest dies. The nesting cycle then starts again next spring with the new queens. Paper wasps can reuse old nests from a previous year, so any visible nests under your eaves should be knocked down.

Mud wasps are very similar to paper wasps except that they build their nests out of mud. Mud wasps will make a nest resembling a dirt clod, lay eggs in it, leave food for the larva, & then seal the cells. Those eggs will hatch out the next spring.