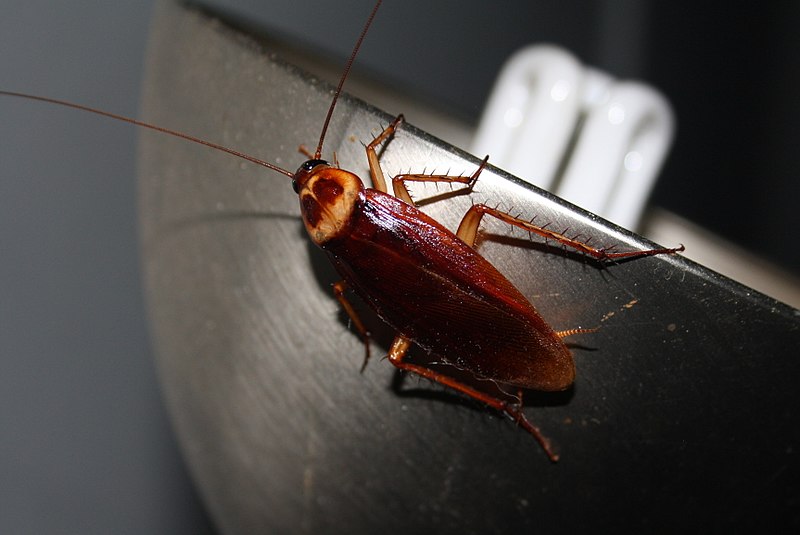 Types of Roaches: German, Palmetto, Oriental, American, Smokey Brown
Name applied to approximately 3,500 species of flat-bodied, oval insects forming the suborder Blattaria of the order Orthoptera. Cockroaches have long antennae, long legs adapted to running, and a flat extension of the upper body wall that conceals the head. They range from 14 in. to 3 in. (.6-7.6 cm) in length. Some cockroaches have two pairs of well-developed wings, the front pair covering the hind pair when at rest; others have reduced wings or none at all. In some species only the wings of the female are reduced or absent. Many species are able to fly well, although the familiar household species do not fly. Most cockroaches are shiny brown or black, but bright yellows, reds, and greens occur in some tropical species. Cockroaches are night-active insects and most live in damp places; most are omnivorous scavengers. They are worldwide in distribution but are most numerous in the tropics. Most species live in the wild in their native regions, e.g., the wood cockroaches, species of the genus Parcoblatta, found under forest litter in the NE United States. A few tropical and subtropical species that have been introduced into the temperate zone have become residents in human homes, where they multiply rapidly and are serious pests. They invade food supplies and emit foul-smelling glandular secretions. Their shape enables them to use tiny cracks as hiding places. They are popularly believed to be carriers of human diseases, although this has not been proved. The large, dark Oriental cockroach, Blatta orientalis, is a cosmopolitan household species. The smaller German cockroach, or Croton bug, Blattella germanica, native to Europe, is the common urban cockroach of the NE United States. The American cockroach, Periplanata americana, is a large light-reddish species that invades houses in the S United States. Cockroaches reproduce sexually. Their eggs are encased in capsules called oothecae, which in some species remain attached to the abdomen of the female until the eggs hatch. In a few species the ootheca is retained within the body of the female and the young are born live. Young resemble the adults except in size. The group as a whole is extremely old; fossil evidence indicates its extreme abundance during the Carboniferous period, about 350 million years ago. These ancient cockroaches were able to fly and were probably the first flying animals. Cockroaches are classified in five families of the phylum Arthropoda , class Insecta, order Orthoptera, suborder Blattaria.

German Cockroaches are about 1/2″ to 5/8” long as an adult. Nymphs and adults have two black stripes behind the head. Females can reproduce without males. Cockroaches are aggressive foragers that contaminate, devour, and destroy food. They can cause or aggravate asthma, especially in children. Cockroaches seldom if ever live outdoors in the Northwest. They are usually stowaways, carried indoors through both edible and non-edible purchases. Be sure to remove bulk packaging as soon as possible. Keep areas free of food debris and water sources.